DALLAS (DECEMBER 12, 2019) – The NFL announced on Thursday morning that All Pro Center Travis Frederick will be the Dallas Cowboys’ team nominee for the 2020 Walter Payton Man of the Year Award. Presented by Nationwide, this highly regarded award recognizes the NFL player who best demonstrates excellence on and off the field. The winner will be chosen on February 1, 2020 during Super Bowl weekend. Along with the 31 other team nominees announced by the NFL on Thursday, Frederick is now eligible as a finalist to win this prestigious award.

Over the course of his seven-year career in professional football, Travis Frederick has been one of the most active athletes off the field while be a staple of consistency on it. In 2013, Frederick was selected to the NFL’s All-Rookie Team before making the Pro Bowl every season from 2014 to 2017. In 2016, he was First Team All Pro. Since founding his charity, Frederick his implemented a pair of ongoing community outreach programs and has impacted more than 70,000 in-need individuals suffering from severe hunger. 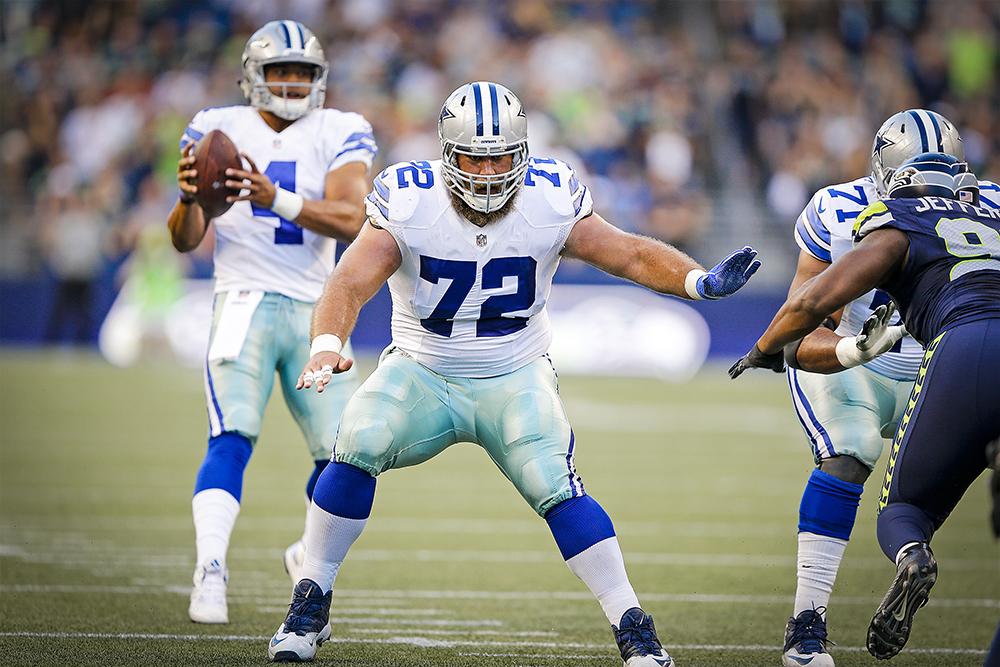 Players selected as team nominees receive a $50,000 donation to the charity of his choice as well as an additional $50,000 donation made in his name to expand the NFL’s Character Playbook. The winner ultimately receives a $250,000 donation to his charity. Frederick will look to join Drew Brees, Eli Manning, Larry Fitzgerald, Thomas Davis, JJ Watt and Cowboys teammates Jason Witten as the active NFL players who have won the award. In honor of his Walter Payton Man of the Year Award nomination, Frederick’s helmet will feature a decal of the trophy’s silhouette for the remainder of the season.

As part of the announcement, fans will have the opportunity to support their favorite nominee by participating in Nationwide’s fourth-annual Charity Challenge. Through this social media campaign, fans are encouraged to post about their favorite nominee using the #WPMOYChallengeFrederick hashtag on Twitter, Instagram, and Facebook. The player with the most mentions using their unique hashtag will receive an additional $25,000 for his charity of choice, courtesy of Nationwide. Second- and third-place finishers will receive $10,000 and $5,000, respectively.

The Cowboys selected Frederick as their Walter Payton Man of the Year Nominee during the 2017 season, as well. That year, Frederick launched his inaugural Travis’ Pantry at Trinity Basin Preparatory Academy and held the first two seasonal initiatives of his Nourish2Flourish program, earning him Community MVP honors from the NFLPA.

Frederick has battled back from missing all of last season while recovering from guillain-barré syndrome, an autoimmune disease that attacks the nervous system. Since returning to the field, Frederick has played in all but three offensive snaps this season for the Cowboys, reestablishing himself as one of the top centers in the league.